I was reading a great post by my friend and fellow ninja Chris Penn the other day about taking the long view and how the ninja masters of old would often put things into motion years if not decades prior to them coming to fruition. It got me thinking about a habit I have of creating opportunities and how it mirrors the actions of those same jonin from feudal Japan.

Our society tends to focus on the immediate, short-term, instant gratification. And with the economy being what it is, for some folks, they can only focus on the immediacy of where their next meal is coming from or how they’re going to pay the mortgage this month. I know. I’ve been there.

But even if you are still in a precarious situation, you can still take steps now that may eventually bear fruit. After all, the ninja leaders of old didn’t have a crystal ball they could look into and see which of their plans would eventually work. They had to take steps that ensured no matter what the outcome was, they were positioned to derive maximum benefit and security from it. As Chris wrote in his article, these jonin would often dispatch field operatives years in advance and allow them to work themselves into positions of power where once they were needed, they would be above suspicion.

Imagine doing the same in your life. You put things into motion now – even little things that don’t obviously seem to have much tangible benefit – that might one day play a critical role in your success. I’ve been in the habit for a while now of reaching out to all manner of people whether I know them or not. I make it a point to establish relationships, even if it’s as seemingly superficial as simply saying hello to them. As time goes by, the relationship develops beyond the superficial until I good conversations, talk to them about their lives and their work, etc. Those relationships have led to some pretty amazing opportunities over the years.

When I got started on Twitter and Facebook, this became much easier. I would find interesting people and friend request them or start following them on Twitter. I can remember a conversation I had with someone who asked me why I was following people I didn’t know. My answer was simply, “because I want to know them.” Maybe they had a job that was in an industry I want to penetrate. Perhaps they have friends that I’d like to eventually know. Or maybe they’re extremely accomplished people I admire.

I’m sure this sounds opportunistic and it certainly is. That’s the point. I don’t look at my career and think about tomorrow. I look at my career and think about ten years from now. Twenty years. Forty years. And then I look at the trends and various businesses that I want to get involved with and map a route to actually getting into those areas. That involves social engineering.

Obviously, relationships are a big part of creating opportunities. We’ve all heard the old adage “it’s not what you know, but who you know.” And that’s true…at least to a certain extent.

People often ask why I have the word “ninja” on my website and my personal brand. Is it because I like to think of myself as some dude swathed in black with a sword strapped across my back? Hardly. I use that term to help market myself, knowing the allure the word has, as well as for the very reasons I’ve outlined here: I take the lessons from the old and apply them to the modern world to create my future success.

You can do the same.

Every day, I make a conscious habit of reaching out to someone new that I don’t know. I do some basic research on them – a quick glance through Google is usually enough – and then reach out. Sometimes, the friendship is rejected, but often it is not. And then the process starts. A key aspect is the fact that these are not one-sided relationships; you have be willing to give of yourself as well to really make them work. It might takes years to see something beneficial, and some relationships never bear any tangible fruit at all – although I would argue that interacting with others is its own reward and keeps us all mindful of the larger global community.

Social engineering is just one example of how you can create your opportunities. There are many other ways. I’ve often said that writers need to study the business they’re in and then study any other business tangential to writing. Then look beyond that. Get out of your comfort zone and explore things. You might start to see opportunities long before other people do. A lot of companies try things out in beta and if you’ve got your eyes open, you’ll see a chance to get involved before anyone else. That helps put you in a unique position and can be good for generating buzz, putting you in touch with other people who might prove beneficial, and even selling your products. My good friend Joe Nassise got involved with a new company called unglue.it and they launch today at noon – it’s crowdsourcing to keep one of his novels forever free if they crowdsource enough money. Joe’s one of the first four authors to take part in this and it’s a great opportunity for him. (You can get involved in it by going here.)

The point is, you have the ability to create your opportunities every single day – even when in the midst of the most dire circumstances. Make my habit yours and reach out everyday to someone new; read something you didn’t know about before; watch a show or attend an event you have no current interest in. When you continually open doors, the odds start improving that you’ll eventually find some amazing pathways to explore.

Be like Gregor the Oligarch from the DirectTV commercials. Say it with me in your best Russian accent: “Opportunities…I creates them.” 🙂 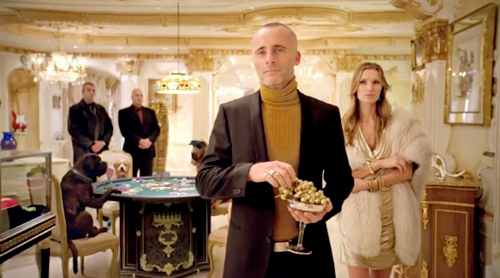 PS: TONIGHT at 6pm EST is my amazing virtual author event with Shindig. I’ll be talking to fans, answering questions AND showing an exclusive NEVER-BEFORE-SEEN clip from THE FIXER TV series. It’s FREE but you must RSVP NOW by clicking here.