So, we’re getting down to the end of the month and I’ve been very happy with my ebook sales. I’ve already surpassed last month, but I want to introduce even more people to my Lawson series. So, I’m posting a bit of a challenge – feel free to play along! I’m going to try to sell 300 copies of THE FIXER today, Friday, March 25th. Doesn’t matter if it’s for the Kindle or the Nook and there are links to each out here.

But I’d like your help in spreading the word about it. If you have a few friends who you think would enjoy the series, then please pass this on to them. In a few short weeks, the official website for THE FIXER TV series will debut along with new video footage, new books, and much more. This is the time to drive new fans to the series and get them hooked on the fun-filled world of Lawson.

So please join me today and pick up a copy of THE FIXER. If you already have it, please make sure you’ve got the rest of the series, since we’ll be unveiling new adventures very soon.

Bestselling author Barry Eisler of the famed John Rain series of thrillers has just turned down a $500,000 traditional publishing deal with St. Martin’s Press in order to go the indie publishing route. He and Joe Konrath talk it out over a lengthy, but SO worth your time post over on Konrath’s Blog. The short of it is this: things are changing, traditional publishers are locking up right s and paying writers crap. So screw it and go indie. But check it out and then come on back. I’ll be here…

Good read, right? And I’m one of those traditional authors who has recently seen the light. For February, I made $3200 from ebook sales – the majority of it coming from my Lawson Vampire backlist and new adventures not available in print. For March, I’m on track to do even better. This isn’t flash-in-the-pan stuff. It’s not some marginal fringe movement (no matter how badly those whose livelihoods are tied to traditional publishing might wish you to believe).

Ebooks aren’t going away. More ereaders are flooding the market at lower price points. And a reasonable price point on ebooks means they become “impulse buys” instead of drawn out financial decisions. Think about iTunes. 99 cents for a song? Easy buy. Click, click, click.

Is print dying? No. But people aren’t buying books like they used to. I’ve often said that my job is to deliver entertainment. I personally don’t really care how that entertainment gets delivered, just so long as it does. And with the plans I have in motion now (“In 3 weeks, everything changes…” <--mysterious side comment not associated with this post) that will be realized. More books, more control, less time to bring books to market, better ability to adapt to changing market conditions, and a consistent and expanding audience. Sounds like a winning combination to me.

Enemy Mine: To Benefit Japan 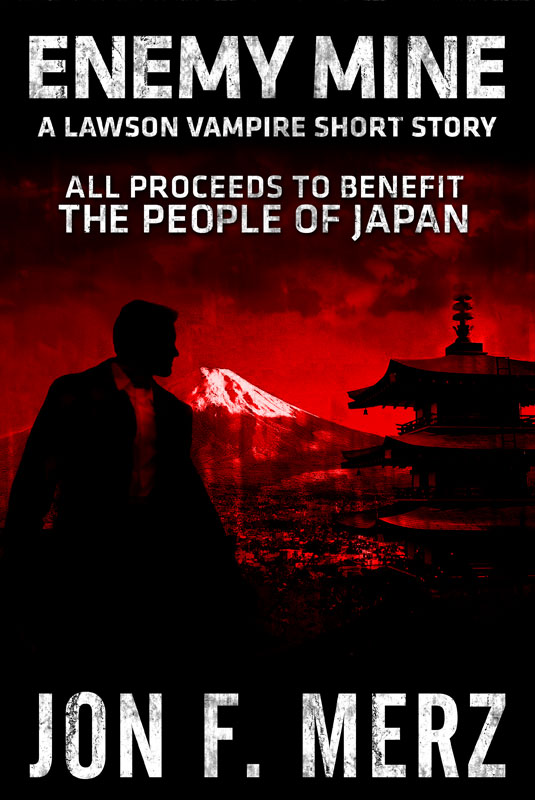 Some of you know how much of a Japanophile I am when it comes to their culture and martial traditions. Needless to say, the events of last Friday have saddened me and simultaneously inspired me to want to do something to help the relief efforts. I was originally supposed to be over in Japan right now, but the universe had other ideas – fortunately.

I wrote ENEMY MINE over this past weekend and all proceeds from the sales of this story will go directly to agencies providing relief services to Japan during this terrible time. I’m hoping to sell a whole lot of copies – I just now put it up on Amazon and Barnes & Noble, but you can also order a .pdf and .epub version direct from me if you’d prefer to use Paypal. ENEMY MINE takes place immediately following THE KENSEI, so I hope you enjoy it as it sheds a little more light on a new villain Lawson is going to have to deal with sooner than later.

Also, please help spread the word about what I’m doing. Share it on Facebook, Tweet about it on Twitter. Post about it on a blog. The more sales, the better. And every little bit helps. I have friends in Japan directly affected by this tragedy; this one hits close to home. Thank you for your help and I hope you enjoy the story! Note: I’ll update this post with links when the story goes live at Amazon and Barnes & Noble.com

Sunday marked the start of Read an E-Book Week, a new initiative to introduce more readers to ebooks and their lasting place within the world of content. Obviously, given my success with ebooks last month, I’m very interested in introducing more readers to my work, so a week long push to drive more people to ebooks sounds like a great idea to me. If you’ve got a Kindle, you can check out a complete list of my work by clicking here. And if you’ve got a Nook or other e-reader that handles the epub format, please click here to see what’s available.

Sunday, I also passed something of a milestone. On the 6th day of March, I sold my 1000th ebook of the month. That’s pretty damned cool. My ebook experiences are definitely opening up a whole new world of possibilities and I’m thrilled to meet so many new fans. if you’ve read one or all of my ebook offerings, I hope you’ll recommend them to several friends so my audience continues to grow through

Later this week, the next issue of Boston Nocturne goes out, so make sure you’re subscribed to it since the next installment of the free Lawson adventure MISSION: MALTA will be in the newsletter. Also, later this week or early next, my debut column over at Inveterate Media Junkies goes live. I’ll post details on that when I have them. It will make for interesting reading, though…