Yesterday saw the release of the next Lawson novel, THE RIPPER, which puts Lawson back in Boston trying to uncover the identity of a serial killer while dodging a Chinese assassin, dealing with Marty’s advances, counseling Niles, and dealing with Arthur’s past. It’s a chaotic mix of non-stop action and mayhem. And sales have been very good indeed!

You can grab your copy of THE RIPPER for the Kindle here and for the Nook here.

But THE RIPPER isn’t the only new adventure out…

Earlier today, I released SIX TIMES DEADLY, the first Lawson story collection featuring six short stories: The Price of a Good Drink, Interlude, Red Tide, Enemy Mine, Rudolf The Red Nosed Rogue, and Oathbreaker. Along with those six stories, I also included some cool bonuses: the script for the first part of the Lawson graphic novel and the first two chapters from the Talya spin-off novel series CODENAME: BELLADONNA. Yep, you heard right: there’s going to be a Talya spin-off novel series. It’s been in the works for a while now and with the advent of ebooks, I can actually write what I want without having to appeal to the whims of New York City publishing. I have three Talya novels sketched out and expect to complete the first one this year. I’m excited about it; Talya’s a great character and well-deserving of her own series. Hopefully, the fans will enjoy it.

You can grab SIX TIMES DEADLY for the Kindle here and >for the Nook here. 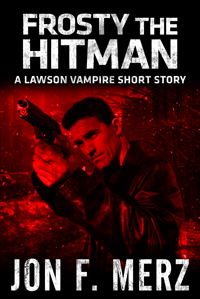 And finally, FROSTY THE HITMAN is now available for sale. This is the freebie short story I gave away on Christmas Day, but that window has now closed so if you want it, it’ll cost you 99 cents. You can grab that for the Kindle here and for the Nook here.

Next week, I’ll be releasing OATHBREAKER on its own, but if you want this new story now, you’ll have the get SIX TIMES DEADLY.

I’d like to thank all of you who have bought THE RIPPER. I’m very pleased with it’s rapid sales and success. And I’m especially thrilled to be finding so many new Lawson fans out there! Enjoy the new adventures – more are coming!