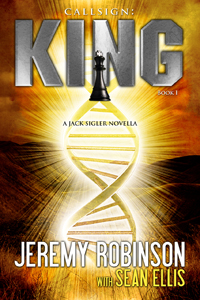 “Hurray for free Kindles!” you say, but who the hell is Jeremy Robinson? Allow me to introduce myself. I’m the author of eleven mixed genre novels, published in ten languages, including the popular fantasy YA series, THE LAST HUNTER, and the fast-paced Jack Sigler series (also known as Chess Team—not nearly as nerdy as it sounds), PULSE, INSTINCT and THRESHOLD from Thomas Dunne Books/St. Martin’s Press. I’m the co-author of an expanding series novellas deemed the Chesspocalypse, which take place in the Chess Team universe. If that doesn’t wet your whistle, I’m also known as Jeremy Bishop, the #1 Amazon.com horror author of THE SENTINEL and the controversial novel, TORMENT. For more about me, or my books, visit www.jeremyrobinsononline.com.

I have watched for years as my fellow authors held online events called blog tours. Some would visit ten blogs. Others, as many as ninety. And every day they would bring something different, waxing eloquent about a multitude of topics. When I finally decided to have a blog tour of my own, and settled on doing each and every weekday in October, my first thought was, “This will be cool,” which was immediately followed up by, “Holy crap, I can’t think of something interesting to say twenty times in one month!” I can barely think of something worthwhile for my own blog just once a month. The solution is what follows; each blog participating in the tour could ask me ANY three questions. That means, if the subject matter bores you, I’m not to blame! Huzzah!

But fear not. There are other rewards for sloughing through the questions and answers. I’ll be giving away two Kindles to two randomly selected readers who sign up for my newsletter. Details on the giveaway can be found below. On to the Q&A!

While writers really just want to write, I know that you do a lot of varied promotion including trailers and promo videos. Do you find this a fun and exciting way to bring on new readers?

Marketing, for the most part, is a drag for me. It’s typically very monotonous and non-creative. I was an artist and screenwriter before becoming a novelist and I’ve made a bunch of short films. So when it’s time to market a book, I often turn to video. For some books, I create video trailers. I acquire the rights to video clips, hire a voice over actor, and edit the whole thing together myself. It’s a fun process. But the real fun is the creation of viral videos—funny or shocking videos you hope will be entertaining enough for viewers to share. My first viral video campaign was for Antarktos Rising. We made ten videos. Some caught on, some didn’t, but the videos have had over 400,000 views, which is pretty good.

With the advent of ebooks and less face-out shelf space in stores, what do you think is the #1 priority for getting your titles into a reader’s hands?

It’s hard to peg any one marketing technique for e-books. There’s a lot of good ways to get the books in front of readers eyes. And what works for one author may not work for another. But before that begins, there is the question of quality. The book has to be great. The cover needs to be spectacular. The simplest way to put it is this: if my book isn’t indistinguishable from the best books put out by the big publishers, then I’m not happy. If the book is substandard, it will never benefit from word of mouth and sales will be doomed when bad reviews appear. If the cover is poor, sales will likely never take off. Quality has to be the first priority, and its often the first thing skipped as authors rush to publish their books.

As with anything, competition drives the market. Who or what do you feel is your biggest competition?

The knee-jerk reaction when considering competition is to look at other authors in the genre and think about how you can outdo them. But that’s not really the reality for most authors. In general, we authors tend to help each other more than seek out the destruction of competition. We’re not corporations. We’re creative individuals, and there actually aren’t that many of us, so we tend to stick together. More often than not, authors are happy to promote each other’s books. It’s why you see so many quotes from “competing authors” on each other’s books.

The true competition for books is other forms of media, specifically TV, movies and video games. While I have nothing against these forms of media, and honestly hope to be involved in the creation of all of them at some point, most people have turned towards these things and away from books. It’s not that books are boring, or slow. It’s that we live in a society where BAD books are forced on kids. Okay, maybe they’re not bad books, but they’re generally not fun books—the kind of books that kids want to read. This may have changed since I was a kid, but school killed reading for me. I hated it and essentially gave up on reading novels after suffering through Uncle Tom’s Cabin. Confession: I didn’t read novels until I rediscovered them as an adult. And now I write them for a living. Unfortunately, the fix for this is in the hands of schools. Kids need to be raised on good, fun books, and then we’ll have more than enough readers to go around.

Hope that was as good for you as it was for me. Now how about that kindle giveaway?
Here’s the deal: to be entered to win one of two free kindles all you have to do is visit my website—www.jeremyrobinsononline.com—and sign up for the newsletter. That’s it. The first kindle will go to a randomly chosen newsletter signup on October 31. For the second kindle, there’s a catch. The second giveaway will only be triggered if one of my kindle books hits the Amazon.com bestseller list (top 100). So pick up some books (most are just $2.99 a pop) and spread the word! If one of the books squeaks up to #100 for just a single hour, the second kindle will be given away to another randomly chosen newsletter sign up on October 31.

** I will announce winners via Twitter, Facebook, my blog, and newsletter (which you will be signed up for!) but I’ll also e-mail the winners directly—I’ll need to know where to ship those kindles!

Thanks for spending some time with me today. Hope you enjoyed the Q&A, and good luck with the kindle giveaway!

Note: today’s guest post is from a good friend of mine and an amazing writer, Willie Meikle. He’s got some fantastic fiction available for ebook readers. Read on and find out where he draws his inspiration from. – Jon

There were two main points of inspiration for my vampire series, vamps themselves, and Hadrian’s wall on the Scotland/England border.

I’m a traditionalist when it comes to vamps – mine are evil, bloodsucking bas*ards. They don’t have souls, they don’t have good dress sense and they don’t get to snog Sarah Michelle Geller. Oh, and they’ll bite anything, not just ladies with big, exposed, bosoms.

I’ve walked the length of Hadrian’s Wall several times, and I’ve been to Culloden Moor where the final battle takes place. I have a deep love of old places, in particular menhirs and stone circles, and I’ve spent quite a lot of time travelling the UK and Europe just to visit archaeological remains. I also love what is widely known as “weird sh*t”. I’ve spent far too much time surfing and reading fortean, paranormal and cryptozoological websites. The cryptozoological stuff especially fascinates me, and provides a direct stimulus for a lot of my fiction.

Which brings me to The Watchers trilogy, my retelling of the 1745 Jacobite Rebellion in Britain. Bonnie Prince Charlie, and all his highland army, are Vampires and are heading south to claim the British throne. The “Watchers” of the title are the guards of the old Roman wall built by Hadrian, now reinforced to keep the vamps out. It is constantly patrolled by officers of the Watch, two of whom become the main protagonists of the series. I got the idea on a walk along what is left of the wall, and by the time I’d had finished my walk and had a few beers the first part of the trilogy was fully formed in my head. Think “ZULU” or “Last of the Mohicans” with vamps and you’ll get a feel of what I was trying to do.

I was dealing with a retelling of the Bonnie Prince Charlie story, where romantic myths have subsumed the harsh reality of a coup gone badly wrong. I needed to strip all the romance out of the Highlanders and build them up from the bottom. Making them a shambling army of vamps and mindless drones seemed an obvious place to start. The Watchers series is a swashbuckler, but there is little lace and finery.

What I do have is blood and thunder, death and glory in big scale battles and small scale heartbreak. I love it.

THE WATCHERS OMNIBUS edition in print

WATCHERS BOOK 1: THE COMING OF THE KING on the Kindle