There’s No Shame In Coming In Last: NEVER QUIT 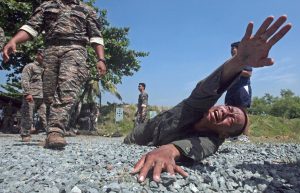 I read a blog yesterday written by a wanna-be fitness coach who is entering her first CrossFit competition soon. One of her stated goals for this competition is to “not come in last.”

Here’s what that “goal” says to me about the person who wrote it: she’s insecure about her fitness level and doesn’t want to look like a loser when everyone else finishes before her.

Talk about missing the point – especially since she apparently wants to coach others.

There is absolutely no shame in coming in last. And if you think anyone is going to stand there and chuckle at you for doing so, then clearly you haven’t been doing CrossFit long enough to understand how amazing the community is. The loudest cheers are always for the people who finish last. We’ve all been there. We’ve all been the last to complete a WOD. We’ve all had that moment of absolute suck with heaving lungs, pounding hearts, and sweat pouring from our bodies. All you want to do is crash to the ground and die.

You keep going. One rep at a time. Until it’s done.

People who only do things they’re good at aren’t growing or evolving as human beings. Staying in your comfort zone is not how you improve, it’s how you stagnate. And thinking that coming in last is somehow embarrassing or less than acceptable is silly.

Here’s how progress works in CrossFit (at least from my perspective. I don’t have my L1 yet or anything, lol):

At each and every stage, there is a high probability that you are, in fact, going to be last. It’s only logical. As you challenge your body, it has to grow to adapt to the new stress you’re placing on it. You can’t simply go from scaled workout to RX and think that you’ll finish first. It doesn’t happen that way. Any new stress or skill is going to challenge your body and result in a slower time to finish. Once your body grows and adapts, you’ll be able to do it faster. Right up until you challenge yourself again.

Yes, I’ve seen plenty of people come into the box who do *exactly* the same thing over and over again. They’re still using light dumbbells, they’re still substituting exercises for other exercises, and they’ve completely plateaued in their progress. They’re not getting stronger; they’re not getting faster; and they’re certainly not getting any fitter. These are the same people who then get disgruntled and whine about their lack of progress. Or worse, they leave the box and say “CrossFit doesn’t work.”

It’s because their thought process is wrong. And it stems from the same mentality as what that blogger wrote.

If you can’t get comfortable with the idea of being uncomfortable – of moving outside of your tidy little box of convenience – then you will never ever grow to achieve what you’re truly capable of achieving. Forget about what others might (or probably won’t) think of you coming in last. Who gives a shit? You’re challenging yourself. The real competition is inside your head. As long as you know you pushed yourself harder today than you did yesterday – that you struggled to do better – then the opinions of anyone else don’t really matter one little bit.

I’ve said this before to countless other people. I would rather go into a hostile situation with someone who has a “never quit” attitude than someone who has never been challenged. Send me in with the guy who failed, picked himself up, failed again, picked himself back up, and dragged his sore as shit body over the finish line long after everyone else has finished. You can keep the gazelles who cruised through easily and without breaking a sweat. Because frankly, those people aren’t an asset. They’re a liability when the shit hits the fan. I want the guys who know how to keep going when all you want to do is quit. I want the guys who know how to keep fighting through pain and tears and crying and all the other discomforts that come from being outside their comfort zone.

Those are the winners.

Challenge does not equal easy. Growth never is simple. And anything meant to improve you is going to be hard.

Martial arts, fitness, CrossFit…hell, LIFE (or at least a life worth living) are all like this. But the joy and satisfaction you enjoy after the hard struggles have been faced and overcome are worth SO much more than whatever pleasure a lazy attitude brings.

Don’t be afraid of failure. Don’t be afraid of “not getting it right.” Don’t be afraid of looking like a beginner. Everyone worth knowing has been there before. If you want to truly grow and get better and improve and then be able to inspire others to the same achievements or higher, then you need to fail. You need to be uncomfortable. You need to get crushed and humbled and have your ass kicked. It’s there that you find the true strength that will enable growth and push you to the next level. I’ve been there so many times in my life; I’ve failed at every single endeavor I’ve ever attempted – sometimes many times at the same thing – and I know what it’s like to get crushed.

But it’s worth it.

So I’ll say the opposite of what this blogger said: come in last.

And be proud that you did.

Like this article? Found it useful? Consider using the Cent Up button below to say thanks with a few coins!