The End of Fabruary

Bunch of stuff to talk about today…

Last week was spent suffering through a nasty bout of the flu. I was down for most of the week (the worst was actually over in about two days, but the lingering effects sucked) and spent all my awake time finishing off my final Rogue Angel novel. I’ve had an absolute blast writing on that series, but after eleven novels, I’m pretty burned out. The folks at Gold Eagle are fantastic to work with and I really enjoyed my time with them.

But I’m excited about things ahead for one big reason: the preceding month has been renamed to “Fabruary.”

I’ve always viewed the coming ebook revolution with something of a jaded eye. After a decade or more in this business, I’m always wary of supposedly “new” things. But I’ve also been playing around with ebooks for a few years now. I had some early success with it with regards to Parallax and then, after putting out a host of novels, short stories, and a few other things, my sales flatlined at about $100 earnings each month for the last year. That means I was making about a hundred bucks on sales of everything I had out on the Amazon Kindle platform. Not impressive, by any means – especially when I’d read blogs by other folks like Joe Konrath, Amanda Hocking (she just bought a house for cash with her ebook earnings), and even some closer friends and colleagues – all of them were enjoying some serious success.

So, I decided to try to remedy that. At the end of January, I put my entire Lawson backlist – four novels, a novella, and four short stories – out on both the Kindle and the Nook platforms. In February, I also debuted a new novella, SLAVE TO LOVE, and then in late February, I reworked the cover of Parallax, dropped its price to 99 cents, and put an excerpt from THE FIXER in the back of it. The goal was to use Parallax as something of a gateway drug to my Lawson series.

The results have been amazing.

Thanks to a series of incredible covers, the Lawson backlist is selling very well, indeed. As of this moment, THE FIXER alone has sold 450 copies on the US Kindle store alone. Priced at $2.99, the novel has earned me $900 and change this month. That’s 100% gorgeous passive income – and it’s 9 times what I made in total for the previous 9 months.

Ah, but I’ve got more than one Lawson novel. I’ve got four. The other three are all selling triple digits. The novellas are closing in on 3 digits and the short stories are selling very well.

So, by itself, the Lawson backlist was generating very strong sales during the shortest month of the year.

But on Saturday morning, something incredible happened: Barnes & Noble featured Parallax in an email promo to its customers. Nothing elaborate; just a simple shot of some book covers. Parallax was featured in its “thrifty reads & great stories” section. I had no idea this had happened until very late Saturday night. Saturday morning, I saw that Parallax had suddenly sold 55 copies and I thought, “huh, interesting.” I continued to watch the numbers climb all day and into Saturday night. By midnight, it had done 347 copies for the day.

Incredible. My sales rank in the Nook store was beating the likes of JD Robb/Nora Roberts and I was on par with ebook success Amanda Hocking. I had no way of knowing if the trend would last, but yesterday, I sold 233 copies.

I have no idea if the Parallax burst will last, but I’m thrilled to have gotten such an amazing push. I’ve sold 25 copies this morning. You can still get it for the Nook HERE and on the Kindle HERE for just 99 cents. It’s a great book, one of my best.

So, with all that said, I’m very excited. The ebook revolution means that I have the freedom to write whatever I want and get it out there as soon as it’s ready for mass consumption. No longer do I have to slave over a proposal and hope that an editor in New York understands the scope of the project, gets excited, can then pitch it to a room full of supposed experts, gets the green light to acquire it, makes a decent offer (lol), and then tells me the book will be out in about a year. Now, if I have an idea I think is cool, I can just write the thing and put it out. If it flops, no biggie. If it’s a hit – all the better. But the amount of time and number of hoops to jump through for me to reach my readers has now been drastically winnowed.

Am I through with traditional publishing? Probably not. But I will say this: my attitude has been changed tremendously given the success I’ve had in the shortest month of the year. I have big plans to get a lot more material out for ereaders – more Lawson, new series, fun stuff – a veritable ton of things that have only been ideas and “failed” proposals until now. (I say “failed” only because they didn’t sell in the traditional publishing world.)

The landscape is changing. Dramatically.

Borders has gone bankrupt. Is B&N going that way, too? Probably not since they adopted an ebook strategy. But the thing about ebooks is this: they’re not going to stop. And more people will get an e-reader. I love the feel of traditional books, but even I have been reading some things on my iPhone lately. We’re either at a tipping point or beyond it now. Millions are reading ebooks and millions more will soon join them.

And as much as they may insist that costs are high for producing an ebook, it’s a bogus argument. I can put an ebook out on the Kindle and it takes me perhaps thirty minutes to do. Same for the Nook. I can hire someone to design a great cover.

So why would I give a publisher more than 50% of the proceeds from ebook sales?

For me personally, there’s a lot to think about in the coming months. Where do I want my career to go? With THE FIXER TV series moving ahead, do I want my books tied up by a traditional publisher that doesn’t pay me a fair rate?

Before the ebook revolution, the folks in New York (by and large) determined the destinies of writers.

Since the ebook revolution, that power has shifted. On a seismic scale. Writers now control their destinies. We can write what we want and sell it to our readers. Fewer middlemen means a lot of very good things, indeed.

For the month of Fabruary, I just broke $3,000 in earnings for my ebooks. 30 times what I’d earned each month for the previous year. (and frankly, there are many writers making a LOT more than that right now, so my potential for sales isn’t going to go down, it’s going to go up as I a) produce more material, b) the number of folks reading ebooks climbs, and c) the number of e-readers sold climbs…)

That kind of success can make a person stop and think.

So, while I do that, here’s a new review of THE KENSEI and a fun little Q&A with Talya. Enjoy!

With the entire Lawson Vampire backlist selling well on both Amazon and Barnes & Noble, I’ve decided to get a lot of stories, novellas, and novels out into the ebook marketplace. So, to give you a snapshot of what’s ahead, here’s a list of what you can expect between now and next year. The exact schedule is up in the air as I juggle multiple projects, but this should be a fair indicator of about when you can expect things to show up for sale.

THE MADAGASCAR MATTER – This was supposed to be a serialized novella but it’s grown into a full-fledged early novel (meaning pre-Fixer) with Lawson and Zero in Africa. I’m still finishing this up, but I expect it will be out by the end of March.

THE SHEPHERD – Not sure what this is going to be yet. It’s already proving it’s too involved to be a short story, so odds are good this will be a novella. I expect to have this out around April/May.

MISSION: MALTA – A serialized piece for my newsletter, so this will end in December unless it takes on a mind of its own. This will be a short story.

THE CAIRO CONNECTION, CANARY TRAP, A FORCED DISAPPEARANCE – A trio of longer short stories originally supposed to be published by a certain UK chapbook publisher under the banner of DARK OPS. Due to problems with that publisher, I’ll be bringing these out myself. Probably a Fall release.

THE RIPPER – Officially, the 6th novel in the series, it will be out in trade paperback from St. Martin’s next Spring.

Other Lawson projects include two other novels (not releasing the titles yet, but they’re coming) and a few more short stories. Lawson’s world is growing everyday and new fans are getting caught up in the rapture – between the ebooks, print novels, and the TV series, things are going to get crazy. And we still have to get the graphic novel finished at some point as well. Lots of stuff happening so please spread the word about Lawson and his adventures. And if you don’t have an ereader yet for your smartphone, a Kindle, Nook, iPad, or other ereader, you should probably get one soon. 🙂

Need to get caught up on some Lawson adventures you’ve missed?

Additionally, I will be working on the first NINJA novel, the sword & sorcery epic starring Ran, a recent ninja school graduate. I’ve gotten a number of emails lately asking when that will be available, so I’ll be working on that. I also have to do revisions on my boys adventure series THE NINJA APPRENTICE. Busy times ahead, but good fun – lots coming at you! 🙂 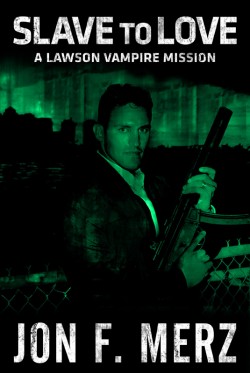 What are you doing this Valentine’s Day? If you’ve got a Kindle or a Nook or a smartphone with either app installed, you can spend it with Lawson back in 1987 in Vienna. SLAVE TO LOVE is a special novella that I’ve just released.

In it, Lawson must travel to Vienna to recover an ancient artifact, but ends up finding a little more than he bargained for when he meets the alluring Liesel. From the Grand Hotel Wien to the forested banks of the Danube, the action and heat are non-stop. Grab this special novella today!

Get it at Amazon.com | Get it at Barnes & Noble.com