You might remember this project idea I had a while back. I created a Kickstarter campaign to try to fund it, but that didn’t work out too well, so I shelved it for a bit until I could figure out the right way to pursue it. About six weeks ago, I finally came up with how I wanted to present this series and now, the very first adventure is live! 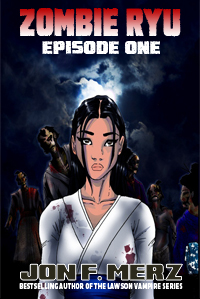 Zombie Ryu takes you back in time to feudal Japan where a crazy monk has unleashed a zombie invasion upon the land. They stalk the countryside at night, killing innocents, destroying home and farms, and leaving a wave of paranoia building across the land. For eighteen year old Shigoko (“secret talk”) life has been largely frustrating. She wants nothing more than to become a mighty warrior, but she is stuck on her rundown farm with her father, their most prized possession being an old samurai sword. When Shigoko’s farm is attacked by zombies one night, she flees into the woods and stumbles into the camp of the gnarled ronin Fudo and his squire Nishi.

Shigoko’s life will never be the same.

Fudo is gathering the greatest warriors in Japan – samurai, ninja, ronin – to head north to the most remote places in Hokkaido in their search for the evil monk. Together, they will become known as the Zombie Ryu. Only time will tell if they are successful, and only time will tell if Shigoko has what it takes to become the warrior she has always dreamed of being.

ZOMBIE RYU is written like an episodic television series. Every month, a new 25,000-word episode will debut as the warriors of Zombie Ryu edge ever closer to their goal of ridding Japan of the zombies and the evil monk who created them. Zombie Ryu also features wonderful cover art from my good friend and amazingly talented artist Courtney Rose.

Since today is launch day, I hope you’ll share this news around to your friends and family. Thank you for your support! Enjoy the series!