Don’t Compare Yourself to Other Writers

Over the last seven/eight days, I wrote just shy of 70,000 words. The schedule and word count per day broke down like this:

For me, this was a good haul. I’m in first draft mode, which (as some of you may remember) is what I affectionately call my “puke it out” phase. This is where I don’t give a crap about the quality of what I write; I just want the basic storyline down so I can then go back and rewrite, edit, tweak, ad infinitum until I’m satisfied with the quality of it. My method for writing during this phase looks pretty much like this:

Depending on my pace and how fast the ideas are rolling, it’s possible that I will top out around 16,000 words each day – which is my personal best. More often, my comfortable daily range is 10,000-12,500 thereabouts. That’s comparable to the time a lot of people spend working each day in an office. By and large, this daily rate is unsustainable for much more than a week. And if I wrote like that each day, every day, I’d burn out in no time. But when everything is firing on all cylinders, yes, this is the rate I can churn out words at.

And you know what? Big deal.

Should you be impressed? I don’t know. I don’t much care. I don’t post word counts to brag or gloat. I post them because it’s a good day’s work FOR ME and I’m satisfied with what I accomplished. And therein lies the rub: as you progress as a writer, you will inevitably find a system that works for you. I discovered mine writing eleven installments of the Rogue Angel series for Harlequin’s Gold Eagle imprint. I had seriously short deadlines and as a result, found that I work very well doing first drafts in very little time. It’s intense and requires a lot of Twix candy bars and Pepsi, but it works for me quite well. So that’s how I write first drafts these days.

Last night I posted about sending off the first book in the Shadow Warrior series to my editor at Baen Books (while I’d been working on the first draft of this new novel, I’d also been editing Shadow Warrior.) and combined with the fact that I finished the first draft, I was enjoying basking in the afterglow of a job well done. A friend of mine reposted about me writing 70k words in 7 days on her status and that then opened up the floodgates of nonsense: 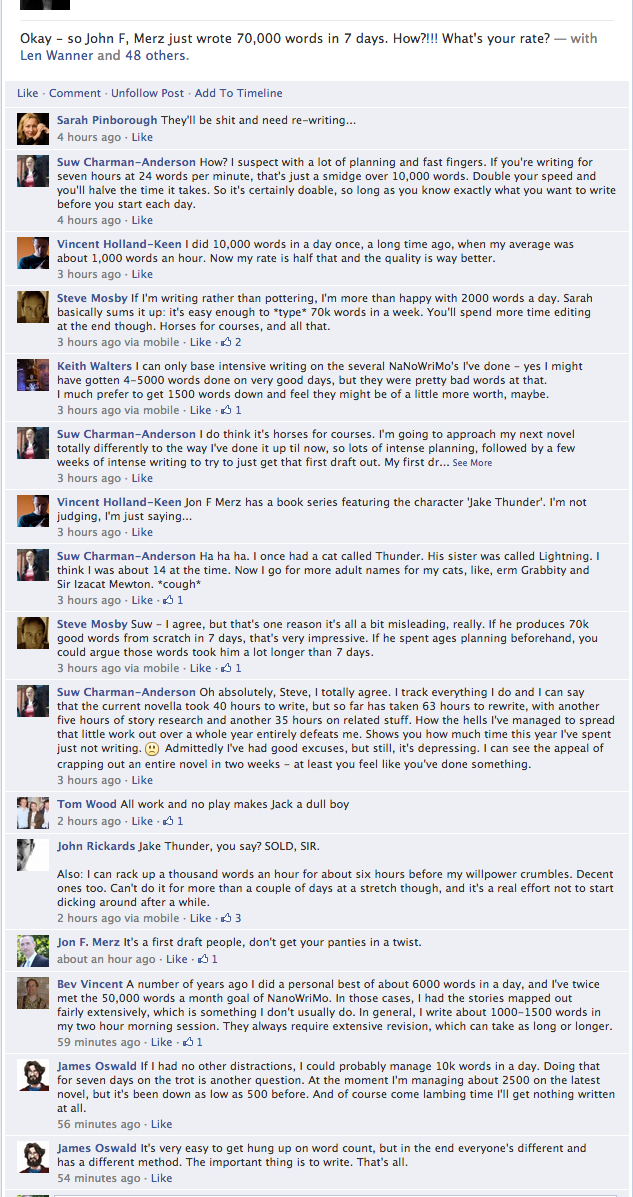 So here you’ve got a whole group of supposedly professional writers taking issue with what I’ve accomplished. Sarah Pinborough wins the award for “So Obvious, It’s Too Stupid To Post It But I Will Anyway” comment. Suw Charman-Anderson thinks that it takes some insane amount of pre-planning before anyone is capable of doing what I did. (In reality I worked from 3-page synopsis). Vincent Holland-Keen arrives on-scene to gladhand himself about how awesome he is for not writing as fast. Later on this same tosser brings up my character Jake Thunder (obviously without seeing the bit about Jake’s Native American past) and then claims he’s not judging, when in reality, he’s doing exactly that – equating hardboiled PI genre work as being lowbrow. Steve Mosby offers up his assessment that all I really did was “type” and later on agrees that my level of output is “misleading” because I might have spent months planning it out. Keith Walters offers up his assertion that he feels his quality is better when he writes 1500 words as opposed to anything more. Tom Wood trots out the belief that by me working so hard, I must have no time for anything else – he should probably take a gander at my biography and then spend a day with me doing everything I do (on second thought, he’d probably tap out before we even got to breakfast) prior to imagining me as some recluse without a life.

THANKFULLY, James Oswald shows up with a bit of reason.

The rest of that is pretty pathetic – a bunch of supposedly professional writers calling my work into question because they compared themselves to what I do. Had I posted a status update along these lines: “Yeah, just cranked 70,000 words in one week. What’s up other bitch writers? You guys suck for not being able to match my pace. Slackers. Doesn’t anyone have the power to go toe-to-toe with me?” then their little bitchfest would have been understandable.

But I don’t do that. I don’t compare myself to other writers. As far as I’m concerned, the only person I’m competing against is myself. Did I write this book better than the last? Did it take me longer to do so? Will this one sell better than the last book I wrote? Can I tell the story even better the next time? That’s what matters. Not what some other writer is doing. I don’t care what other writers do in the course of their work. If they’re bringing out one book a year – good for them. If they manage ten books a year – good for them. All I care about is what I do.

And all you should care about is what YOU do. When you write, there’s no one else involved. So why should it matter how other writers do their work?

But writers tend, by and large, to have massive insecurities and massive egos. They like to think their way is the best and everyone else sucks anyway. This is why writers invent awards that no one has ever heard of, let alone cares about. This is why you get little bitchfests like the above. A lot of writers cut down other writers – and especially aspiring writers – because it makes them feel better about their place in the mud puddle. But none of that matters.

Time was, there used to be only so many books published each year, only so many editors, only so many contracts. Competition was tough. Nowadays, anyone can write and publish. Unfortunately, that makes the old “pros” mad. It upsets them that people didn’t have to slog it out in the trenches and accumulate tons of rejections. To most of these veteran writers, the new upstarts represent a direct threat to their livelihood.

That’s ridiculous, short-sighted, and frankly, stupid. But there you go.

At the end of the day, what you accomplish is up to you – it’s not up to the whims of someone else. If you want to get something done, do it. Whining about quality or quantity or any of the other idiocy exhibited in the screencap above is wasted time.

Listen to your gut and do what works for you.