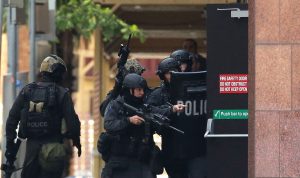 NOTE: I originally wrote this up over on Facebook, but a good friend of mine, Jim Cobb, requested that I turn it into a blog post. So here it is.

My newsfeed is filled with a staggering amount of ignorance today in the wake of the Sydney siege. We live in a dangerous world; there are no places that are immune to violence and bad things can happen *anywhere.* Your life is first and foremost YOUR responsibility. To that end, you should – at the very least – have a basic understanding of the following items.

1. Environment: when you enter a new location, take note of entrances and exits. How many avenues of escape do you see if it became suddenly necessary to flee? If you’re in a restaurant, the kitchen likely has a door in the back. Does your office have a freight elevator? Stairs? Are you sitting with your back to a wall so you can observe a wider field of view in your area? Run down a mental checklist in your head; it’s not hard and it doesn’t take that long.

2. Firearms: a lot of people don’t like guns. That’s fine, but you should still have a working knowledge of various types. In the Sydney incident, for example, the gunman reportedly had a shotgun. If you were in that situation, you could ask yourself several questions: what type of load does it potentially have? Slugs or shot? (the difference between a “spray” effect or not) Does he have to pump every time to shoot? If so, there’s a better chance of escape before he can chamber a fresh round and fire again. (compare that to a situation involving a full-auto AK47 where he could spray off a full clip of devastation before needing to swap magazines).

3. Hostage Rescue Tactics: if you find yourself in a situation, you should understand the basics of hostage rescue. This way, you’ll have an idea of what is going on on the outside and that knowledge could well keep your morale up. Ordinarily, this will break down as follows: the assault team arrives and immediately sets up an immediate action plan (this is the plan for what happens if everything goes to shit immediately and the gunman starts killing people; they have to storm the location and do the best with what little info they have). Sniper teams will set up to relay intelligence to the assaulters. Negotiators will be trying to establish first contact and then develop rapport with the offender. All intelligence gathered will be relayed to the assault teams and they will develop and refine the plan for going in. One assault team is usually ready to deploy immediately while another rests. Negotiators will attempt to get the offender to release a few people as a token of good faith, usually in exchange for a small demand from the bad guy. This isn’t always the case, nor will the negotiators promise things they can’t deliver since that jeopardizes any rapport built up. As the hours drag on, both sides will grow weary. In a confined space like an airplane, it will smell like hell. This is a dangerous time, especially at night, so you need to be extremely vigilant. In the event the situation deteriorates and the decision is made to send the assault team in, they will lead with flash/bangs that will shock and disorient you. Lay down as the team comes in – get your head down. Once they have neutralized the threat, you will be roughly manhandled out of the immediate area. This is not the time to be offended at how you are being handled. The team’s concern is twofold: get you out of the danger, and also make sure you are not another threat. Don’t give them a hard time and pretend you’re important – you ain’t. This is a brutally short thumbnail of tactics, research for more comprehensive stuff.

4. Your Priorities: If you’re alone and can escape safely, you need to know what you are willing to risk. Some people simply can’t bring themselves to try to escape. Others jump at the chance. Be honest about what you are prepared to do. If you have children with you, how will you get them out of harm’s way? What will your exit route be? Can you put obstacles between you and the gunman? Can you hide? Are you prepared to fight and potentially kill someone? All of these are hard questions that you need to ask yourself. Are you armed? Have you trained under extreme duress conditions? In low light? Amid screams and confusion? If you haven’t, then don’t make the matter worse by pulling a gun. The team coming through that door has no clue if you’re a good guy or a bad guy. They will see a gun and label you immediately as a threat. And those guys HAVE trained to shoot under the worst possible conditions. In other words, don’t think you’ll go Hollywood if the shit hits the fan. Be smart. Otherwise your ego could make a bad situation catastrophically worse.

5. Practice Being Gray: in the event you become a hostage, don’t try to stand out. Don’t make eye contact – even if you’re the biggest baddest SOB on the planet. In fact, if you stare at the bad guy or if you make him feel intimidated, he may simply use you as an example of his intention even more readily. You want to blend into the background as much as possible and reduce the likelihood that you’ll be noticed. Don’t try to friend the attacker. Instead, keep your wits about you. Practice simple breathing exercises to keep calm. Don’t ask for anything. If the bad guy lets you go to the bathroom, or eat, or drink – take advantage of it, but don’t press the issue. Don’t ask the bad guy questions about why he’s doing this or if he has family. Make a note of anything you can potentially relay to the authorities in the event you’re able to escape. They will interrogate you about what you saw: how many bad guys? weapons? explosives? what is his mental state? what languages are they speaking? etc. etc. All of this will be fed to the intel teams that are developing a picture of the bad guys, which then is fed to the assaulters. The longer the duration of time you are held hostage, the more likely it is that some of your fellow hostages will begin exhibiting signs of Stockholm Syndrome, which is a tendency to start sympathizing with the bad guy. Be aware of this. And make a note of who among the hostages may be aligning themselves with the hostage taker.

At the end of the day, this isn’t paranoia; it’s self-protection. The world is a dangerous place and you have choices: you can be active and embrace life, knowledgable about a wide variety of topics that could help lengthen your lifespan. Or you can live lazily among the sheep, given to hysteria and panic when things go bad.

Eyes up, head on a swivel. Stay alive.

Like this article? Found it useful? Consider using the Cent Up button below to say thanks with a few coins!