Turn Off Your Automatic Excuse Generator 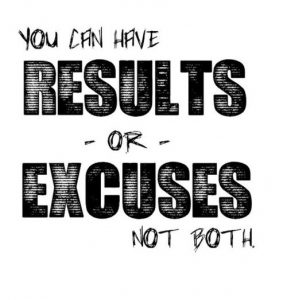 A couple of weeks ago I was riding shotgun in my friend’s car. As we took a turn, he nearly sideswiped a mailbox. When I mentioned it to him, he shrugged it off.

“Yeah, this car is a little wide.”

Uh…no, it’s not that the car was wide, he had incorrectly estimated how much space he had.

The exchange got me thinking about how much of our thinking is wired to provide rapid and ready-made excuses (defenses) against criticism we may receive. Rather than admit that he’d made a mistake, my friend came up with a defense that while in this case was reasonable to some extent, also gave him the opportunity to avoid confronting the idea that he’d screwed up and nearly taken out a mailbox.

How many times in our daily lives do we do this? How many times does our Automatic Excuse Generator enable us to avoid a failure of some sort? Our AEG is incredibly adept at distorting logic and reality so we don’t have to “suffer” through the realization of our own shortcomings, but is such a thing always good? Or does it actually deprive us of the ability to improve and perhaps even see opportunities in our own failures?

Imagine how much clearer your thinking would be if instead of coming up with excuses that nullify or dampen the impact of criticism, we instead simply nodded, accepted the critique, and then made adjustments to improve?

One day at CrossFit, after a particularly grueling workout, one of my coaches came over as I was panting and desperate for oxygen and showed me a quick video clip he’d shot of me doing rapid-fire air squats. He then proceeded to spend about five minutes going over ways I could improve, adjust my knee position, and more.

It would have been easy to have my AEG kick in and explain away my bad form by saying something like, “Yeah, I was really tired at this point.” Or, “My legs were so sore.”

Instead, I listened to everything he said, really focusing on absorbing his points because they were all extremely valid and worthwhile – and now I have something to work on for the future, which will improve my performance and probably lessen any lingering muscle pain the next time air squats come up in a workout.

Excuses are a sort of self-defense mechanism. No one likes to be wrong. No one likes to admit that they did something less well than they could have. So on the surface, excuses protect us from embarrassment and insecurity and the like. But on a deeper level, excuses actually hurt us and damage our ability to see things objectively.

And being able to view things objectively is a critical life skill that many people lack.

Think about it in terms of something like intelligence gathering. Pretend you’re a spy and you’ve been assigned to watch a storage facility where there *might* be something fishy happening. You have no real information at the outset aside from an order to conduct surveillance from the relative comfort of your car. (Relative being the operative word, but at least you’re not on foot out in the cold) As you sit in your car overlooking the facility, you notice two individuals carrying garbage bags entering. An hour later, one of them leaves. He returns forty minutes later with a large duffel bag, approximately four feet in length that seems to be bulging at odd angles. Two hours later, both men leave.

As you read the above paragraph, did your mind start to create possibilities about what could be inside the garbage bags? Or what might have caused the duffel bag to bulge? Did you think about what they could have been up to inside the facility? Were they building a bomb? Did the duffel bag have weapons in it?

A well-trained operative would only include objective observations in his report, noting the times and description of the men who entered the facility. He would note that they carried garbage bags in and that later one of them brought in a duffel bag that appeared full of non-soft items that caused it to bulge.

But someone who allows their reality to be obscured would have filled their report with musings and suspicions about what might be in the bags and what the men might be up to. The result of that subjective report might be a decision to raid the facility, wasting hundreds of man hours, millions of dollars, and a potentially burned operation when it turns out that those men might simply have been innocent dudes storing some old family memorabilia in the building.

This is obviously a very simplistic example of objectivity versus subjectivity, but the point is valid nonetheless. When you let excuses dominate your perspective, you lose sight of what reality is. If you forever give yourself a pass when you should be working on correcting something, then all you do is add another layer of fog to your vision.

It’s not easy, nor is it necessarily fun. But stripping away excuses and being able to call yourself on your own liabilities is crucial to personal development and evolution or even simply getting better at something.

It can be startling when you start paying attention to how your own mind works to “protect” you – when you see how many times each day you generate some sort of excuse rather than face up to the fact that you screwed up in some capacity. This isn’t to say that this is entirely BAD, but it should be kept in balance. It’s not healthy to be forever critiquing yourself, either, but most of us deliver far more excuses than critiques.

So every once in a while, turn off your Automatic Excuse Generator and check yourself. You might be amazed at how much clearer your focus and drive get when you aren’t constantly giving yourself a pass. It can take some getting used to, but self-improvement is never easy.

And imagine what you can accomplish when you’re actually improving instead of making excuses.