How to Be a BadAss 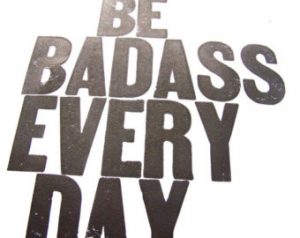 This isn’t a “feel good” post where I tell you how wonderful you are for just being you. It’s a kick in the ass to get your shit straight and do something more than you ever have before. It’s your wake-up call to become a badass. But it’s going to take work and dedication. Here’s how you start:

1. Get Over Yourself: Realize your problems are only as big as you make them. This is not to belittle anyone’s issues, because certainly some problems, are in fact, bigger than others. But there’s one thing you can always control about problems: how you react to them. Some people think their world is going to explode over the littlest things and some other people can have a debilitating accident and come back stronger than ever. The one constant? They chose how to react.

2. Learn Some Shit: Seriously. Pick up a book and read. Put down the TV remote. Play Quiz Up on your phone and play in categories you know nothing about. Ask someone about their job and what they do even if you have no desire to do it. Learn about how other people live. The world is much, much bigger than the little box most of us live in. In order to have a greater perspective you need to know more about a whole lot of stuff.

3. Challenge Yourself Everyday: Don’t shy away from a chance to be better or to take a chance. You only grow by challenging yourself and what you did yesterday. Get out of your comfort zone and get comfortable being uncomfortable. And I’m not just talking about challenging yourself in, say, the gym. That’s great. But you’ve got to challenge yourself every single day in all aspects of your life. Why did you react that way to that idiotic driver? Why did you get mad? Sure, sometimes it’s justifiable, but for the most part, it’s probably not. (This is something I happen to struggle with, so I figured I’d use it as an illustration of how I try to deal with it…) Also, note that I am not talking about having an inner monologue where you constantly destroy yourself with thoughts like, “I’m stupid, I suck, I’m an idiot.” But I *am* talking about constantly checking yourself. Challenge your thought process and you’ll start to understand a whole lot more about who you are as a person. And knowing yourself is pretty damned important.

4. Exercise: You’ve got one body, don’t let it fall apart on you. I’ve lost count of how many Facebook updates I see where people who should know better just let themselves go to shit. Writers especially. I can count on one hand the number of writers I know who are active about their fitness. The rest sit around all day and eventually find their bodies are a mess. Clean your diet up as well. You don’t have to become a vega-nazi, but if you’re eating fast food every day then you’re pretty much poisoning yourself. Try to eat better five days each week and give yourself two days to cheat and eat bad stuff and drink if you wish. It’ll keep you somewhat sane and at the same time, clean up your system.

5. Give Back: Other people aren’t as fortunate as you – no matter where you are in life – so make a point to help someone. Even if it’s just a smile or a few minutes listening to them. You’d be amazed how few people actually know how to listen. Give someone a hand and help them reach the next rung on the ladder. Generate some good karma. Don’t be a selfish jerk. And fer cryin’ out loud, don’t be a cheap prick. There are few things worse than a cheap tightwad who has convinced himself he’s somehow wise about money because he scored a coupon and saved a few bucks. Cheap people aren’t just cheap financially, they’re cheap emotionally. Don’t be like that. I’m pretty sure no one on their death bed ever said, “thank god I got the two-for-one special instead of splurging that night.” Life is about experiences; not about waiting until the day after Halloween to buy all your candy for next year at 90% off.

6. Dream Big. Aspire to something. Get crazy and realize a dream that you’ve been chasing for years or have backburnered because you’re a certain age and think you shouldn’t want that anymore. What? Fuck that. Get after it.

7. Create a Legacy: Make something that will endure after you’re gone. Write a book. Paint a picture. Sing a song and record it. None of these have to be published or hang in a gallery on play on a radio station, but make them anyway so that future generations will have the chance to know you and what you were passionate about. You are not defined by your children; you are defined by who you are and how you live.

8. Stop Complaining: seriously. Just stop. Too hard? Then try going 24 hours without bitching about anything. Build up from there. You’d be utterly and completely amazed how much your perspective changes when you stop wasting energy on complaining. After all, complaining does absolutely nothing except make you feel momentarily better by giving it voice. Imagine how much better you’d feel if you actually changed something instead of simply complaining about it.

Look, your life comes down to this: you can either stay where you are, complain endlessly about useless shit, spew negative energy out into the universe every time you complain about something in your life you don’t like OR you can change your life into what you used to dream it would be. You can’t sit there and read this and think, “yeah but…” and give yourself an out by creating an excuse. Fuck that shit. Fuck your excuses. Fuck settling for what you don’t truly want.

Change is hard, but so is anything worthwhile. So what? You’d rather live a life full of misery and negative energy? Guess what? That shit catches up with you and manifests itself in your physical, mental, and spiritual health. You can literally create your own death by being awash in negativity.

What you have to stop doing is the same old shit, over and over again and expecting things to somehow change miraculously. If you’re some place in your life where you find yourself complaining on a daily basis, being jealous of others who don’t struggle like you do, or are resentful of something, then you need to change and you need to do it now. The old way ain’t working. Change it up. Change your perspective. Change how you react to stuff.

No shit. I never said it would be easy anyway. In some ways, this will be the absolute toughest stuff you’ve ever attempted before.

No, it fucking isn’t.

Those are excuses you’re generating to save yourself from doing the hard work of change. And if you keep making excuses, you will never, ever change. You’ll just continue to wallow in the cesspool of your unhappy existence, complaining to anyone who has the patience to listen to your whining. Being a badass isn’t something you “sorta” do; you either do it all the way, or you don’t. You either make the changes needed or you stay the same. And if you want it bad enough, you’ll find a way to do it. Or you’ll just find another excuse to remain the same.

Climb out of the cesspool and start taking charge of your life. People are pissing you off? Deep-six them. You hate your job? Put some money away and then quit it and find a new one. Your relationship sucks? Bin it and find someone new. There are six billion people on this planet – chances are good there’s someone better out there for you. Is your progress stalled at the gym? Change up your training and start making gains again.

If you’ve read this far, then there is a part of you (and it doesn’t matter how tiny) that wants to do something more, to aspire to greater heights, to not settle for mediocrity, to live with passion and hope and happiness, and to see your dreams come true.

You can do it. I know you can. Others have already done it. Others with far less than you have.

Believe in yourself. Don’t make excuses. Get your head down and do the work.