How I Deal With Fear 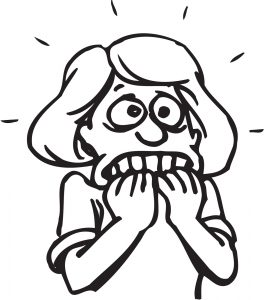 A lot has been said about living without fear or having no fear at all. But these ideas miss a key point: how do you actually deal with fear when it arises in your life?

I spent the majority of my youth living in fear of one sort or another. Not that I was an abused child or anything – far from it – but my life was full of fear regardless. Much of it might seem trivial now, and certainly looking back on it with the eyes of a 45 year old man, I might even shake my head at some of it. But at the time, the things that caused me fear seemed to occupy my life fully and without regard for anything else.

Early on, my very first nightmare that I can remember was of the Count from Sesame Street. From there on, vampires scared the living shit out of me. Seriously. When PBS broadcast the 1976(?) BBC production of Dracula, I saw part of it one night with my dad and was so freaking scared that I slept on the floor surrounded by crosses that my dad made out of two drinking straws. I was convinced that the bloodsuckers would come for me.

When I wasn’t busy living in fear of the undead, I was terrified that I would throw up from some stomach sickness. I hated puking and one of the things I dreaded most was the thought of getting a stomach bug. Regular flu? Awesome. As long as I didn’t vomit, I was cool with it.

And then there were the bullies in my life. From the lumbering ox who lived up the street from me to the jackass at school, I spent my first fifteen years living in perpetual fear that I would get punched out. And never having been actually punched, I always imagined it would be similar to nuclear armageddon.

So yeah, me and fear? We were close.

Around about my 15th year alive on this planet, I decided that enough was enough. I was tired of living scared. It was keeping me from enjoying my life and I had plans and goals to accomplish. I had to come up with a way to handle fear.

With the school bully still an ubiquitous threat, I started studying martial arts. Nothing formal at first, just messing around with some friends who had the same interest. But we sparred and learned some shit and thought we were badasses and put on a show at school one snowy night when I had a fever of about 103 degrees and still went on to do a sword demonstration anyway (which taught me a lot about getting shit done regardless of suffering) and basically enjoyed a bit of a power trip. From there, my study of martial arts became much more extensive, eventually bringing me to Japan in February 2003 to earn my 5th degree black belt in Bujinkan Ninjutsu direct from the 34th grandmaster himself.

But back on my first night at my teacher’s Ninjutsu dojo, I saw people being thrown and rolling around in ways that terrified me. How in the world was I ever going to learn how to do that? I’d never even really somersaulted before in my life. And here they were doing front rolls, back rolls, side rolls, dive rolls, and more.

So I did the only thing I knew how to do: I faced the fear head on. From that day on, I went out into the woods by myself and practiced throwing myself around, hitting the soft pine-needled ground in the Arnold Arboretum time after time after time after time – again and again and again – until the grip of fear around me loosened and I began to relax. My ukemi (as it’s known in Japanese) became second nature. I moved out of the soft forest floor and on to concrete, repeating the same process. Over and over, on different surfaces, on hills, over rocks and branches, over cars, over obstacles, over bodies. If it made me nervous, I did it.

And eventually, my ukemi got pretty damned good.

And I stopped fearing the idea of rolling or vaulting or otherwise hitting the ground. I’d been thrown in so many different and dangerous fashions over the years, and my body was so well attuned to knowing how to relax and absorb the impact, that I simply stopped being afraid of it.

Which, naturally, is when the universe stepped in and decided I needed some humbling…

At my CrossFit box, one of my coaches started a gymnastics class. And one of the things he’s covering is handstands. As part of the training, you need to know how to forward roll out of a handstand in case you need to bail.

Easy day, right? After all, ol’ Jon here has rolling down pat. No sweat. Got this.

You see, there’s a big difference between what I learned in terms of real world rolling and what a gymnastics front roll is. Specifically, my martial arts rolling involves more of a diagonal front roll, taking place from the shoulder obliquely across to the opposite hip. This is how you roll on the ground, concrete, etcetera in order to avoid damaging your spine.

In gymnastics, however, that forward roll starts at the base of your skull, and then travels down along the spinal cord. Provided you tuck your chin into your chest, everything should be well and good. And in theory, this should be a piece of cake for me.

Not only am I used to rolling differently, I’m also used to having throws and such be fast. I’m inverted for maybe a second before I recover and get back up on my feet. In gymnastics, however, I’m working on getting inverted and staying inverted for a longer period of time. My arms are also extended and locked out to support my body. In order to forward roll, I have to first bend them, descend, and then enter the roll itself.

So, like every other time I’ve been afraid of something in my life, I run toward the fear and meet it head-on. I’ll be forcing myself to go in and work on bailing from a handstand until it becomes second-nature to me and the fear loses its grip. It won’t be easy – this sort of work never is – but the rewards are worth it.

Fear is obviously necessary in our lives. It protects us to a certain extent, but it can also hinder us. And allowing yourself to be hindered by fear could be deadly.

I was the junior man one time a long while back and as we were traveling single file at night in an urban environment. I’d wound up at the back with our point man being very experienced and the seniormost guy in the middle. If threats had presented themselves to the front of our formation, the point man could have easily handled them. I felt pretty safe at the back. But we soon realized that the area we were in wasn’t where we thought and we had to retrace our steps. Instead of letting the point man move back and re-assume his position, we simply turned around. Now I was on point. And instead of feeling relatively safe, I was the one who would have to handle the threats as they presented themselves. Fear was there, but I had no choice but to move ahead presumably toward the danger.

And that’s how I’ve always operated: when fear comes at you, meet it head-on. Whether it’s fear of a roller coaster or something far worse, never let fear immobilize you. Keep moving. Always.

I was scared of bullies punching me until I faced my fear and learned that getting punched isn’t the worst thing that can happen to you. Anytime something looks uncomfortable or painful or terrifying, my instinct is to always move toward it, meet it head-on, and conquer it or otherwise remove whatever power it holds over me.

Fear is a constant in our day-to-day living. Physical, mental, and spiritual roadblocks spring up because we’re afraid of doing this or that. How much fear is there in your life? What scares you? What immobilizes you? What stops you from meeting it head-on? And imagine if you did meet it head-on.

Eleanor Roosevelt said to “do one thing every day that scares you.” I happen to agree. Only by meeting fear head-on do we learn how to mitigate it and lessen its impact in our lives. Only by meeting my fears head-on have I overcome them in my life. Whether it was forcing myself to stay overnight in a cemetery to overcome the fear of vampires (okay, I know a trip to Dracula’s castle in Transylvania would have probably been better, but I had budgetary problems, lol), subjecting myself to getting sprayed with pepper spray, throwing myself all over the woods to get better at rolling, moving through an ambush on the streets of Chinatown, or going in today to practice bailing out of a handstand, the process is the same: meet your fears head-on. Get up close and personal with them. Subject yourself to the discomfort and terror of that which seeks to control you and then do it until you aren’t uncomfortable any longer.

This isn’t living with “no fear” or any of the other silly catchphrases self-help gurus use. It’s simply living in such a way that fear doesn’t control you.

In spite of fear, you still accomplish everything you want.