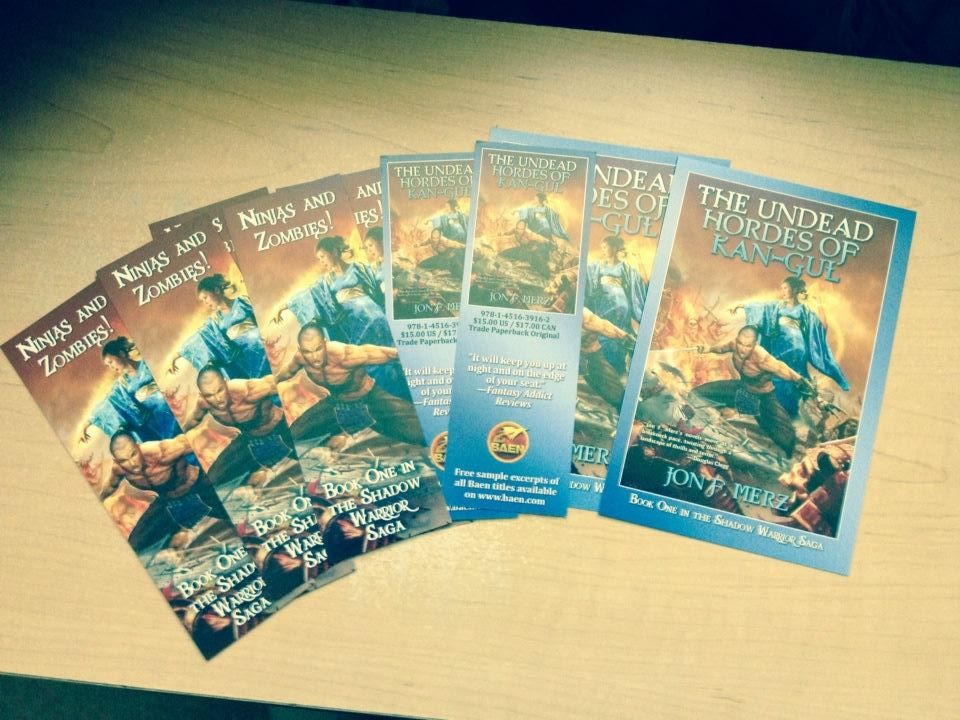 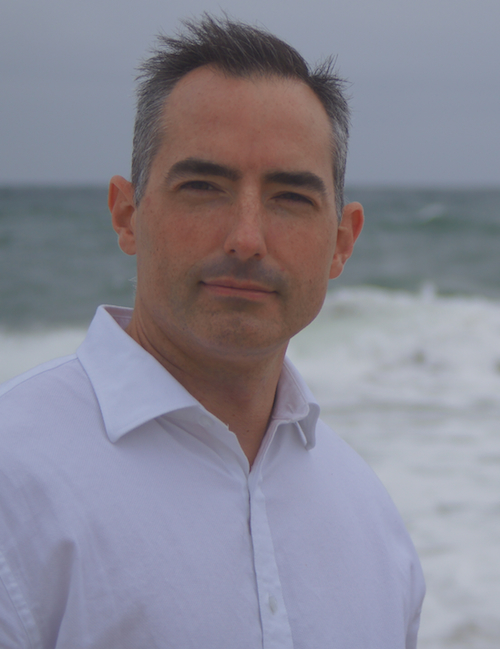 So last Friday, I took off for Asbury park, New Jersey to attend the Zombie Walk – a gathering of zombie enthusiasts from all over as they attempted to break the Guiness World Record for most zombies participating in a walk. Baen Books, my publisher of THE UNDEAD HORDES OF KAN-GUL, brought me down there on their dime to be the featured author at the event.

I shot down on the Acela to NYC and then switched trains, getting into New Jersey shortly before 5pm. My agent, Joe Monti, met me at the train station and we drove over to the shore together, catching up on business and the like. Joe’s an awesome guy and he’s always been very supportive of my work.

Jim Minz, my editor over at Baen, met us at the hotel and got me checked in. After a quick change and freshening up, we headed out to dinner for some Cuban food and live Calypso music. We had an awesome meal, and Baen’s Sales & Marketing rep Corinda met us at the restaurant. Great conversation was had and by the time dinner was over, I was ready to crash. Jim was suffering from a cold all weekend, so he was all for calling it quits as well – especially since we had an early day on Saturday.

Saturday morning we met downstairs and headed out to breakfast. Frank’s Diner was recommended by the front desk and it didn’t disappoint. Huge piles of great food served cheap. (I love me a good greasy spoon!) I had my first donut in years and man, it was delicious.

After breakfast, we headed back to the Stone Pony and started setting up the booth. The day was gray and cloudy and humid. I hadn’t brought any shorts with me, figuring that it would be cooler on the water. As the sun broke through the haze, it got much, much warmer. But by that point, we had thousands of zombies filing past our booth and the fun didn’t stop.

Jim, Corinda, and I manned the booth all day long and we got hundreds of dollars in donations for the Wounded Warrior Project in exchange for signed copies of THE UNDEAD HORDES. Felt great moving so many books, but also knowing that proceeds were going to a great cause. At one point, I took the hand cart Jim had brought along over to the boardwalk and moved hundreds of copies of the book after basically being mobbed by zombies. It was pretty awesome. Young kids and adults alike seemed to be really excited about the book and the event itself.

Exhausted, Jim and I closed the booth shortly before 6pm, headed back to the hotel and crashed for a bit before meeting back downstairs in the lobby for dinner. We enjoyed a good meal, talked about a huge variety of topics – family, politics, publishing, books, and much more. Definitely awesome getting to talk with him so much. Jim’s a great guy and I’m happy he digs my writing.

Sunday we headed over to Princeton to meet back up with Joe and his family for brunch. It was fantastic getting to meet his family for the first time and brunch was spectacular. Jim and I debriefed him on how Saturday went and then we took a stroll around Princeton before Jim drove me into the train station at Trenton for my journey home.

The train was delayed and I ended up getting home an hour later than expected, but after such an amazing weekend, it was hard to be disappointed with Amtrak. A lot of things were discussed over the course of the weekend – one of which is the fact that we will be doing more books in the Shadow Warrior Saga. On the way down, I sketched out details for books 4, 5, and 6, and once book 2 is in the production pipeline, Jim and I will try to finalize that deal (provided sales are strong for the first book.)

With that said, if you haven’t grabbed a copy of THE UNDEAD HORDES already, you really should do so now. And if you have a copy, have read it and enjoyed it, please PLEASE head over to Amazon and write up a review for me. I found out this weekend that reviews on Amazon factor critically into which books Amazon promotes. I could use some Amazonian promotion behind THE UNDEAD HORDES right now, so please get a review posted on the main site and any international sites you might have access to. THANK YOU!

Grab a print copy of THE UNDEAD HORDES by going here.
You can also get a copy for the Kindle here.
And if you have a Nook, you can get a copy here.
While you’re at it, don’t forget to get caught up on all the Lawson Vampire adventures. THE CRUCIBLE hits before the holidays! 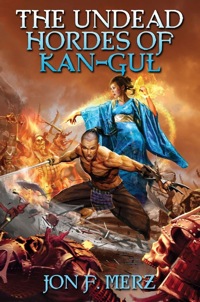 Just a quick round-up of things going on in the week ahead:

Don’t forget, you can grab a print copy of THE UNDEAD HORDES by going here.
You can also get a copy for the Kindle here.
And if you have a Nook, you can get a copy here.
While you’re at it, don’t forget to get caught up on all the Lawson Vampire adventures. THE CRUCIBLE hits before the holidays!

Promotional Memes for THE UNDEAD HORDES OF KAN-GUL by Jon F. Merz

Below, you’ll find some promotional memes for the release of THE UNDEAD HORDES OF KAN-GUL. Feel free to download them and share them around all over the Internet. Visual funny cues like this are a great way to promote the book and I hope you’ll enjoy spreading the word about my latest release. Many thanks! 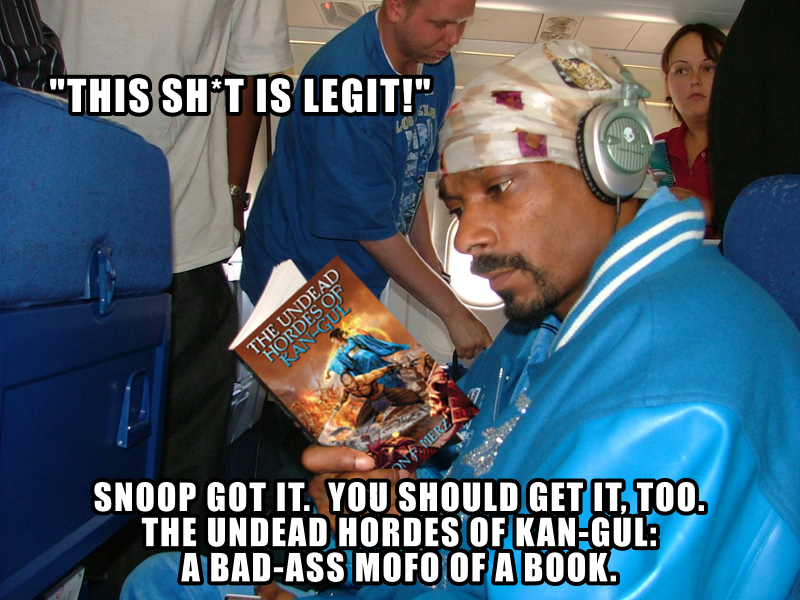 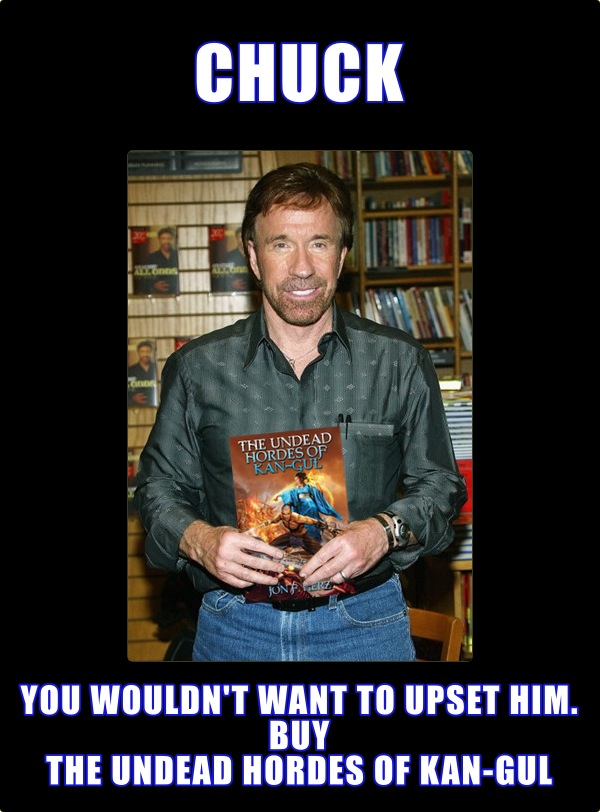 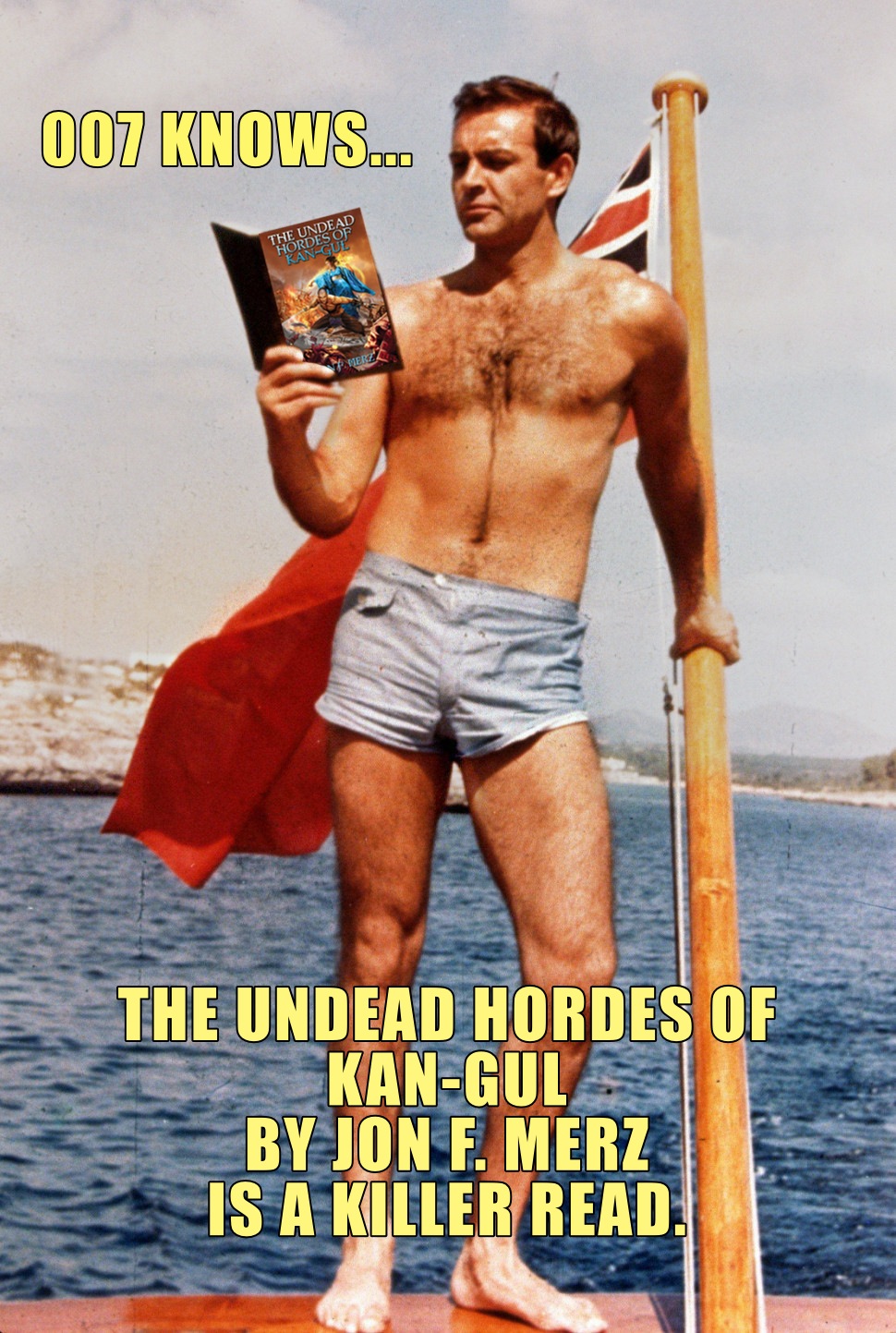 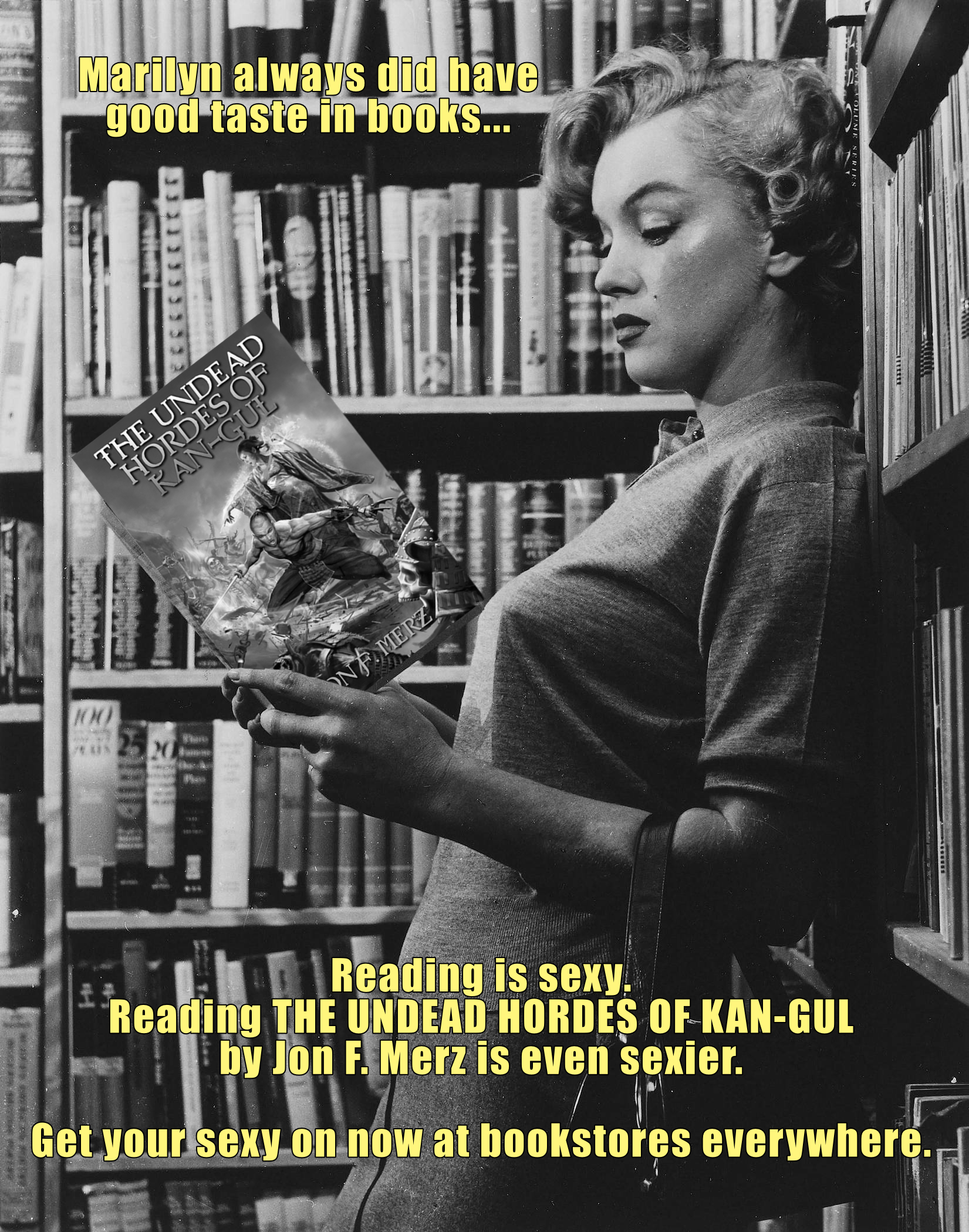 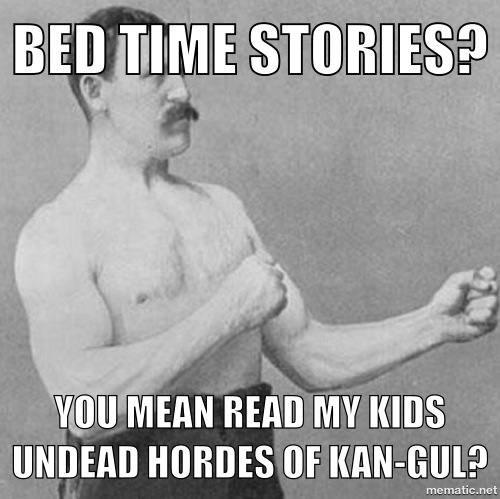 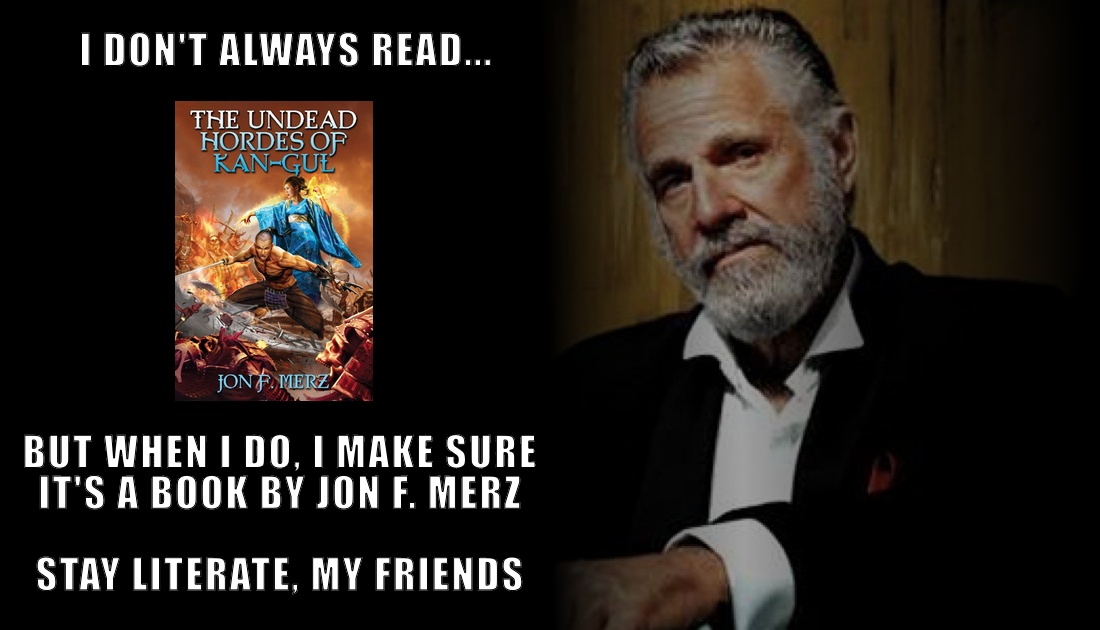 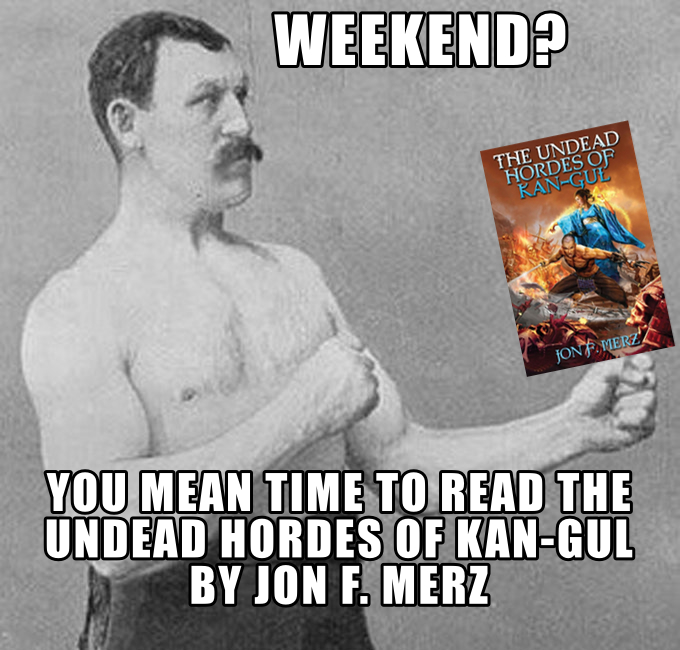